Friday was our 5th wedding anniversary. We didn’t do much, because let’s face it when you have 3 kids including two toddlers and a teenager, every day is just one big, romantic celebration. In case fonts don't translate on your media reader, that was big fat, hairy Sarcasm. With serifs.

Our Vegas wedding was a total blast but as I’ve said before, I am always more excited about the anniversary of our first date in October. The 18th…ish. Neither of us can remember the exact date. This must be why couples make the biggest deal out of their WEDDING DAY anniversary, that's the only date anyone can remember because you have to fill out actual paperwork, send out invitations and schedule things.

Anyway, years of marriage and two children later, here is a quick comparison of our 1st anniversary vs. our 5th
1st Anniversary Celebration: We threw a Vegas-themed party with cards, borrowed a felt-covered covered black jack table and I actually bought card-themed decorations. I found Bellini in a bottle, similar (kind of) to the Bellini drinks they make at the Bellagio in Las Vegas. For dinner I made crab legs, which he loves but hates de-shelling, so I made them early and removed the meat from the shell so he came home to pile of fresh crab meat already taken out of the shell.
5th Anniversary Celebration: I tried all day to get to the grocery store to get food for a nice dinner, but wound up on the phone talking to everyone at my teenager’s school about what his consequences were for blowing off school AGAIN. (He has a possibly terminal case of Senior-it is.) I was still unloading groceries when the Husband pulled in after work. D'oh!

1st Anniversary Preparation: I made sure my hair was freshly dyed and cut, wore a nice shiny Vegasy shirt for the party and busted out the expensive from-the-mall makeup I purchased a year before for the wedding.
5th Anniversary Preparation: My last container of pressed powder fell into the toilet a couple weeks ago when the 3 yr old tried to get her own toothbrush out of the cabinet. I captured to share with Facebook, the world should be inspired by our grace and beauty in ComfyTown.
I did take a bath with that kid that day, so at least I didn’t stink. I grabbed a clean shirt (pretty sure) and clean underwear. I think I shaved this week, but really it doesn’t matter.

Overheard at dinner 1st Anniversary:
“Remember how we always used to say ‘EVERY day is a honeymoon when you’re married to your best friend?!’”
“Tee hee” *Dramatic winking*
“Barf” “Yeah, barf” *Smiling and smooching*
Overheard at dinner 5th Anniversary:
"I want noga bar!” --Lola, age 3
“Aaaahhh!” --The baby
“Look, the kids are starving, this needs to get done so either take over the cooking or get the frick out of here. Too many cooks in this kitchen!” --Me
“AAAHH!” --The baby

Couple Stuff at 1st Anniversary:
Probably not, we had been trying to get pregnant for a year and at that point, couple stuff becomes more about Science than Romance. Calendars, alarms, thermometers, ovulation predictors, beakers and Bunson burners and whatnot.
Couple Stuff at 5th Anniversary:
The only action the Hubs wanted is for me to make a big pot of coffee in the afternoon, to stay awake after the kids went to bed, to play Game of Thrones card game. I couldn't stay awake through one whole round. ZzZzZzZzzzzzzzz

We're not getting older, we're getting COMFIER.

Here is us at our 20th Anniversary: 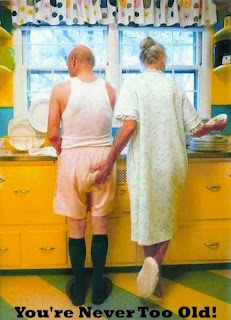 Except we already are too old.
Posted by Unknown at 6:53 PM