You probably didn't notice but I've taken a break from blogging. Also social media, the news, being a grown up, that kind of thing.  The Thankful-est Thing about writing your own blog (besides making up your words) and making no money doing it is that you can take a break any-darn-time you want.

I need to finish up writing about the court case, but Life, stress and getting sick have put that on the backburner. First I need to get out all the gobbeldy gook swimming around in my brain. It feels like a bowl of crazy alphabet soup with all the letters I'm seeing over and over and OVER (hence, needing a break.)
First: ISIS, ALS
Don't worry, I'm not getting into a whole political thing. As thankful as I am for the amount of information and interaction readily available to us, sometimes I just need a break from seeing the same stories and news items over and over.

Whenever a celebrity dies, or during times of especially gruesome stories, anything that just overwhelms, I need to get away from the madness and focus all of my patience on the small people I'm in charge of. They deserve my best, and reading everyone's take on depression isn't going to have me at my best. Nor is looking at eleventy billion ice water challenges, and then the people who actually have the nerve to complain about a genius marketing campaign.

Speaking of the Haters, I believe it was the hilarious Kate Hall that pointed out "curmudgeons gonna curmudge," which made me laugh and I'm thankful for that.

That's usually how I feel and it rolls right off, but the H8Rs really irritated me this time. Sometimes I do stupid things like point out to jackasses how phenomenally jacked their asses are to to complain about something like a successful charity drive gone viral. 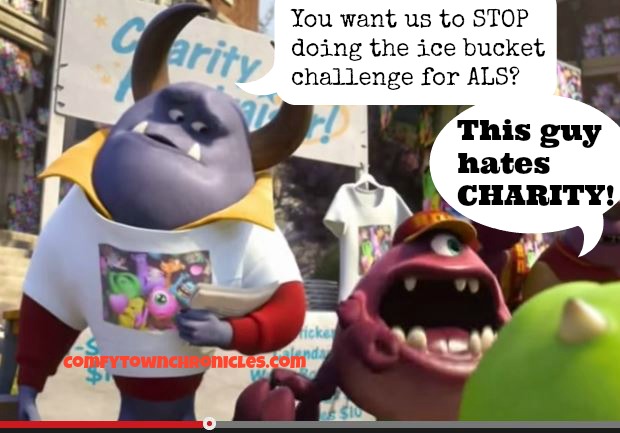 Remember this guy from Monsters U? "This guy hates charity!"
Blogger won't upload the video, but it's here:
https://www.youtube.com/watch?v=qfO9n4sGXEw

This one which obviously raised millions and millions, let alone awareness of a particularly horrific disease. If you can complain about that, you're either jealous that you can't get your finger on the pulse of the scary monster that is the modern marketing market, or you're just a HUGE ass.

Either way, why do I argue with those people? I need to stop. Thankfully now when I'm stressed, I just walk away. And by walk away, I mean uninstall the Facebook app. I'm super thankful I did that, it was one of the best decisions I've made lately. Yes, I still give it a spin through my web browser, but after FB trying to force me to install their stupid Messenger app, it felt like a great decision.

Deleting the Facebook app is MUCH better than getting pissy about it, or taking out all my built-up rage on some random idiot person online. I sometimes do it under the guise of slacktivism, in which we (I) 'stand up' for what we (I) believe in, while not leaving our (my) couch. Hey, most days that's all I got.
When I was nominated for the ALS challenge, I gave everyone a break and explained how my challenge was provided by Mother Nature. It poured down rain the morning I had to take the garbage out. I didn't film it, I'm sure it was riveting.

I did donate a whole whopping $10 and nominate 3 other people. 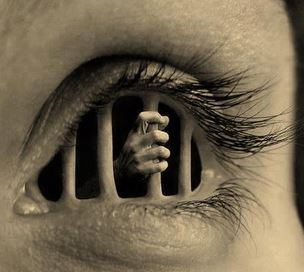 If you don't know about ALS, it's like Stephen King made it up for a horror story. And that's what your life becomes if you get it.

You become a prisoner inside your body, your muscles stop working until you eventually can't even swallow your own spit.  Horrific.

BTS
Back to School. No huge whoop for me this year, physically anyway. Lola, my middle child, is starting Preschool and I watch kids at home so I get to drop her off and pick her up myself. Along with her 2 yr old sister, a 3 month old baby I watch, and her 2 yr old brother.

A 2yr old, bee-tee-dubs, whose father thought it would be a good idea to start potty training him exactly 3 days before he came back to me for daycare. Even though he JUST turned 2, and he doesn't communicate well. And he wakes up from sleep and every nap soaking wet. He's so not ready.

If you followed my Facebook page last year, I used to call this kid Chee-Dubs, or CW, and you probably don't want to know why. This year his nickname is Gross Pants. Because GROSS.

It's bad enough trying to potty train your own kids, but someone else's? Who is NOT ready and not cries EVERY TIME you ask if he has to go potty. Ugh.

I need to focus on the thankfuls of the situation.

I'm thankful they pay me to watch their kids. It covers our groceries, which is a huge Thankful right now. I tried to find other work from home gigs, none of them worked for me while my kids are this young.

Watching other kids gives my kids someone to play with, and also keeps them in check. They have had my full attention since birth. With the 4 year old, it was getting bad. She's pretty demanding. Her dad is better about making her wait, and telling her she needs to play by herself for awhile, etc. I'm working on it, and the extra kids help.

They love the new baby. Though they are jealous when I'm feeding her, or she's crying and getting all of my attention. We're trying to figure out how to have my 2 kids on my lap WHILE I feed the baby. A different kind of human pyramid.
It also thankfully confirms that we never, ever, EVER want to have another baby. Unless we won the lottery or something, this is all we can handle. When the other kids are here, for a total of FOUR kids age 4 and under, I'm running around like a maniac, cursing my inability to stick to a schedule. Kids care none for schedules. They laugh in the face of organisation. And one takes a steaming dump all over it. Literally.

When they leave I'm exhausted, thankful to have just my own 2. Not counting the teenager, which thankfully has been staying at his dads. He may have driven me right over the edge this past week if he were here.

He's a story for another time. Like 10 years from now, when I'm over the PTSD of trying to deal with a young adult with ADD/ODD and whatever other letters you want to throw in the alphabet soup of my addled brain. He's doing fine, he is still working two jobs and is a good person. I just lost all ability to communicate with him, and motivate him to move his life along in a forward direction at any rate.

I know, he is an adult, in numbers, and he has to do most of it himself now. I just can't help wanting to help him with the details. I want to give him necessary life skills that I think young people need to be taught, like:
Cooking, basic of course. I can barely do it.
Banking, online, etc.
Budgeting

That kind of thing. I don't know what the fresh fudge happened to Home Ec in school, but these things are basics that everyone will need to make themselves familiar with at some point. Learning the hard way sucks balls, take it from me.

Hey Mrs. First Lady:
You want to fight the Obesity Epidemic?
Why don't we fund basic cooking classes in school, so kids don't think they have to rely upon a Dollar Menu from a fast food chain.

I know, that probably sounds crazy. Why don't we just continue with the current system that's not working? And keep pushing the nonsense math clusterfudge in school, and then let everyone be unprepared for life. Then everyone and their Aunt Sally can sue McRestaurants for killing us slowly with genetically modified space age polymers under the cloak  of being "food."

See, this type of not-funny ranti-ness is why I've been avoiding being online. How do you fight losing your funny? By writing through, or waiting until it passes? Hopefully now that most of the brain funk is out, mayhaps I can move on. And finish the dang court case post. Which is mostly finished, but it's about 10,000 words, so it needs to be edited down.
Posted by Unknown at 7:56 AM