"A Tale of Two Prostitutes" Part 1

Actually, this a tale of 2 hookers, their pimp-slash-friend-slash-drug dealer-slash-girlfriend, the dead hooker's family, some questionably sloppy detective work and magical drug dealers. But that is a really long title.

WARNING: this post adult themes, and some adult language.
And a gross, heart-breaking glimpse into the fresh hell that is the heroin epidemic currently in the Chicago suburbs. If any of that is a trigger for you, you'll want to skip this one. It's also more sad than funny, because it's the truth.

I wanted to give as many details as I could about the Trial of the Century, or Decade, or certainly Year, that I was a juror for last week. That is a link to the post on jury selection if you're curious.

It's taking longer to write about the trial than I anticipated. It took me the better part of week just to get all my thoughts down. There were a lot of different parts. I still need to edit out what is not significant, put things in order, and get rid of all the redundancies.

I will probably do a 2-part post, otherwise it's too much information. I'm not trying to be cliff-hangery or try to get clicks, I don't look at traffic, stats or even have ads here. I just don't have much time to write. This is just a really good story, and I would love to tell it.

This was thee FIRST ever trial by jury for a drug-induced homicide in the history of my county.

There was only ever one other such trial before, and it was a bench trial.

The judge explained that is why it took so long, and the jurors had to leave the courtroom so many times throughout the 4-day trial. There were parts we couldn't hear, and he also kept checking things to make sure we were proceeding properly. We were all glad he took it so seriously.

Jurors are given notebooks and pens to take notes throughout the trial, but they are NOT allowed to take these notes home. Even after the trial is over. They are left in the jury room, and we were told they would be destroyed.

I tried to jot down some of my feelings and impressions in the evenings as best as I could, just for purposes of telling the story here, but I didn't have much time. I changed the names.

I had to drive my children to other towns to people who could watch them, then drive back to my town to the courthouse. I had to give myself enough time for traffic, to make it through the parking garage and security, to report to the Jury Commission Room. This is where we would start our days.

We were to leave all phones, laptops, pretty much everything other than "handbags" in a locker in the JCR. Then we would line up and start the march up to the 4th floor jury room all before court began each morning.

That may have been the most difficult part. Not discussing the case with each other.

Well, other than having the fate of another human being in our hands of course.

At first I felt it would be easy, and I foolishly thought perhaps it might even be cathartic to bring a drug dealer to justice after what I've been through in my life. Boy, was I stupid. I was so naive about justice way back when this whole thing started. Last week.

I can't speak for other cases or defendants in other trials, but right now I feel that if it's easy for you to hear about another human being, in this case a mother of 4 children, and then be responsible for putting that human in jail for years, you might be a monster. 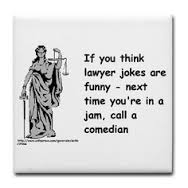 We joke about lawyers, but their job is so much more difficult than I ever imagined.

The injustice they see on a daily basis is devastating.

Cases that can never even come to trial because of lack of evidence.

The botched and/or "lost" evidence, compromised data, destroyed, thrown out and most importantly never seen by juries for a myriad of reasons.

The 'bad guys' that get away. The ones that don't. The families left behind.

I don't know how they sleep at night. I imagine a prescription is involved. Or at least a liquor store.

Speaking of liquor, you would really be surprised at the number of people who SMELL LIKE BOOZE inside a county courthouse. Most of them try to cover it up, like the juror who sat to my right for the whole trial, with mouthwash, cologne, gum, hand sanitizer and for 2 days: Ben Gay. But you could smell the sweet, pungent alcohol smell under it all.

In this case, the defendant was not a typical drug dealer. She may have looked like an addict, from the moment I first saw her at jury selection, but she wasn't a cold-blooded criminal. Their pimp, on the other hand? That's a whole different story. The defendant was certainly involved in buying and selling serious drugs, but mostly she was a heroin addict trying to feed her demon.

For over ten years according to her recorded confession, she struggled with her addiction. She sold drugs and she and the deceased victim both prostituted themselves, to support their habits. But she wasn't a murderer or any kind of cold-blooded killer.

She was friends with the defendant.

The "victim" called her several times and asked her to bring drugs to her, she thought she was helping a friend. Well, as as her attorney worded it, as much as drug addicts can be friends.

She is an addict. To me, a person who needs help. She is a mother, a young woman, a person. A person who is already incarcerated and now stands to receive a sentence of an additional 6-30 years in prison.

Six to thirty years in prison.

For helping a friend.

Why? Because law were passed to deal with the current epidemic* of heroin use, abuse, addiction and death.
________________________
*That's not my being dramatic, this is taken from my daily suburban newspaper, the Daily Herald:
"With 72 heroin deaths in the past 20 months in this County alone, heroin has become a public health issue of epidemic proportions."

In response, drug-induced homicide laws were changed in 2011. They are not an all-encompassing solution, but this was a measure taken to at least take control the portion of the problem that enters and takes place in our county.

When you're accepted as a juror you swear under oath that if the state's attorney(s) proves that the defendant broke the law as it is written, beyond a reasonable doubt, you must be able to sign a guilty verdict. I swore I could.

The judge told us to put our feelings aside as much as we can, review the evidence, read the exact wording of the law and if the state has proven the defendant is guilty, we must vote guilty. The burden of proof is on the state. If the state has not met it's burden and proven the charges beyond a reasonable doubt, we must vote Not Guilty.

Pretty cut and dry, right? But there is always more to the story.

I'll get to the story eventually, but here is the law in my own words.

The law states that any person found to deliver a controlled substance, in this case heroin, that caused or contributed the death of a person, is guilty of drug-induced homicide. The heroin need not be the sole or immediate cause of her death.

We did not need to consider intent, or anything else. To us, after hearing the details of the case, this is a very broad and unspecific law.

If you don't agree just picture yourself when you were younger, or a friend or family member. If you or they happened to be a person who delivered a controlled substance to a friend as a favor or some such situation, even BY REQUEST of the recipient, and those drugs happened to contribute to that person's death, you or they could be guilty of drug-induced homicide. The penalty is 6-30 years in prison.

It's probably true that these drugs are not the drugs of our youth, but they are all too common today. It wouldn't matter if you weren't a drug dealer, or didn't mean any harm to that person. The law says nothing of intent or circumstances beyond delivery and death. Harsh. That is the law.

The case, the law and the evidence were very black and white to me. It wasn't easy to find to sign a guilty verdict, but after hours of deliberation we did.

Here is how I explain the case to a casual acquaintance when they ask:

Hooker A gives Hooker B heroin and crack. Hooker B dies. Under the letter of the law, Hooker A is guilty of drug-induced homicide. And one count of delivering a controlled substance.

Why did it take us four days of court, and four hours of deliberation to find a verdict? Because there is always more to the story.


In a couple days, I will start with the story. I don't mean to be all network television about it. I just have to get the details in some sort of order that makes sense. Many witnesses testified to the same thing, some details aren't necessary to the story, etc.
Posted by Unknown at 5:14 AM