It's been a busy week, lots to be thankful for. Family Vacation, and all that it brings. I'm working on a post for the things I've learned from mine over the years.

We swam, played games, had bonfires... 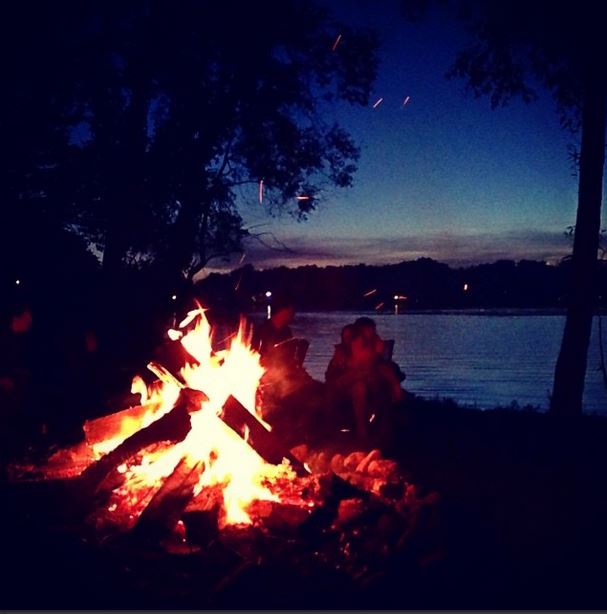 That's Lola on the other side, she's not as close to the fire as it looks
...made S'mores. Seriously. Whoever realized that 3 pretty good foods together combine to form a Perfect Snack, deserves some sort of award. Much more than actors do. Steve Buschemi is damn entertaining to watch, but probably an awful snack.
We went on their pontoon boat, which I STILL kind of feel like I'm aboard almost a week later. I don't have pictures aboard the boat because I'm not allowed to bring my phone near the water, after killing so many phones. Someone else took this on my sister's neighbor's pier.
We went blueberry picking... 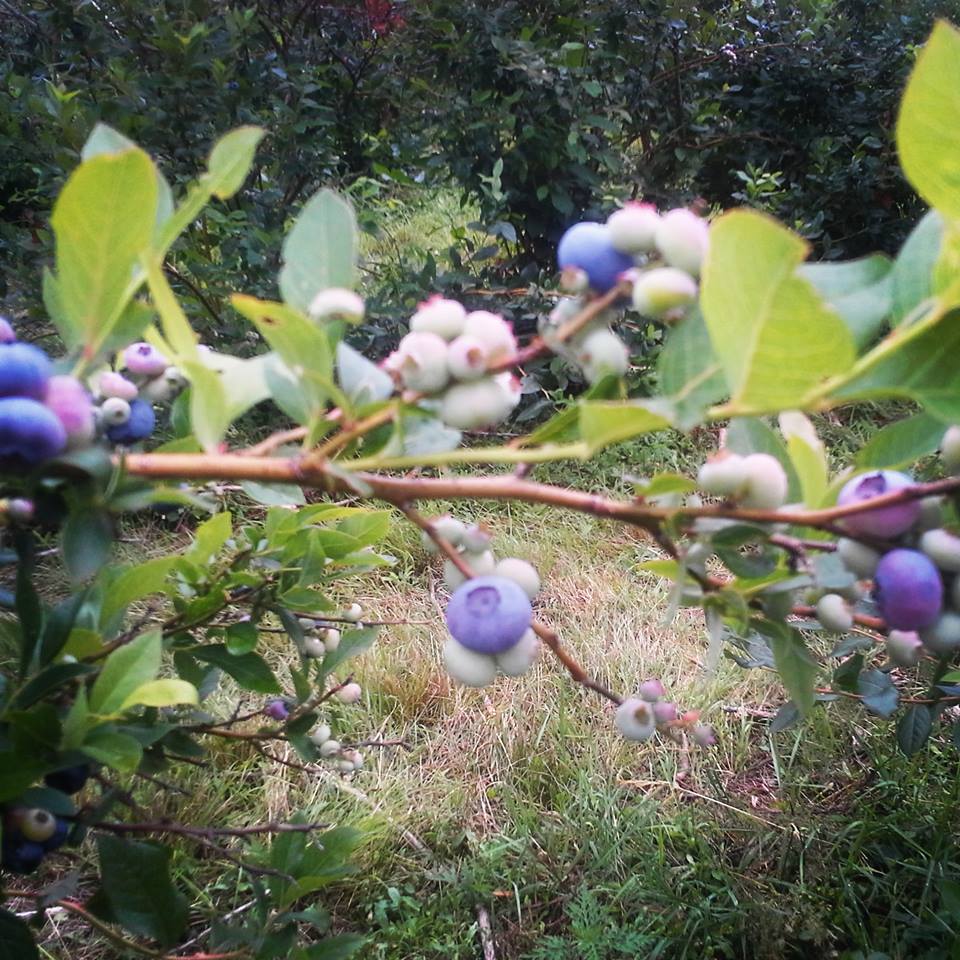 ...and had some good relatively-clean family fun.

My husband took the week off work, we did some necessary home-groaner projects. Which, as per our usual, brought about MORE projects. Cleaning the laundry room caused THIS to happen behind the dryer.
It's okay to marvel over my husband's shiny pipe. Yeah, this is more duct work than PIPE, but that's not as funny.
Fun fact: Did you know when you replace duct work, you're not actually supposed to use the duct tape we know and love? And have tons of. Nope, totally different tape.
It was a good thing this happened because this contraption (below) in our duct work from the 1950's, which they thought would be a smart way to heat homes, blows carbon monoxide into our HOUSE, and needed to be fixed. For the past almost 6 years we've lived here with this. Maybe I'll be less tired all the time now? Who knows.
That meant: Back to Home Depot for us! We should really just have our paychecks direct deposited to their headquarters. I'm thankful we have this house, DGMW, but we've been there so much this year, my kids think it's their playplace.
Now instead of crying and screaming to get down from the cart, they're yelling and screaming and LAUGHING while running down the aisles. Somehow that's better. 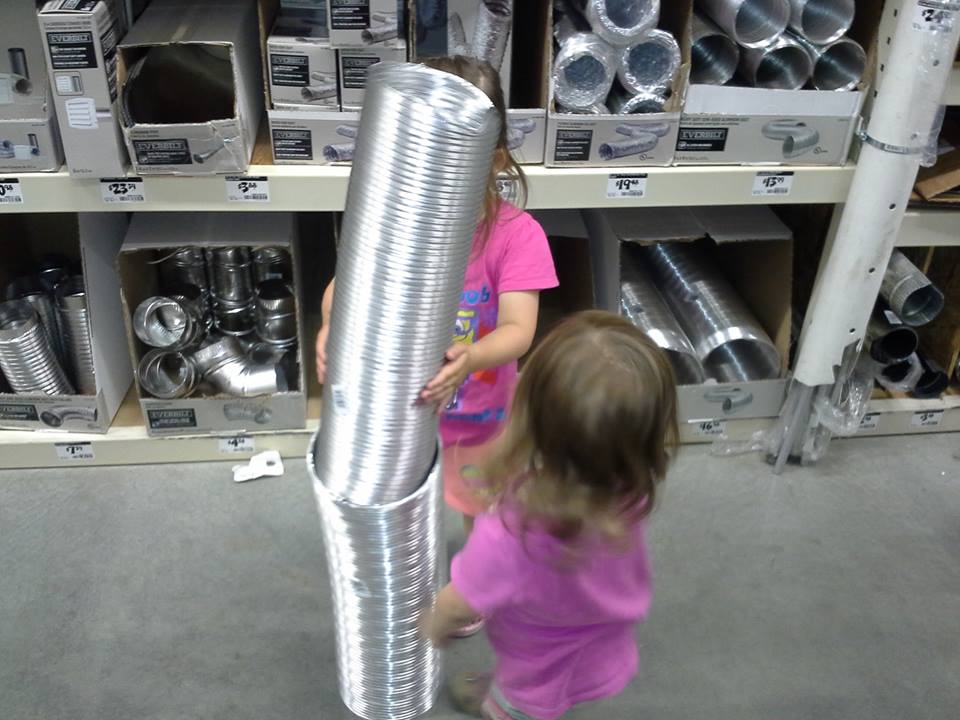 and building towers with duct work.
Their noise still seems to bring workers blissfully to us, asking if they can help, and making sure my kids don't hurt themselves so we don't sue them. Double bonus!

This post is part of the best better-than-a-blog-hop Silver Linings Upside-Down-Frown-Turn, that hopefully washes away some of the week's bad deeds of this sinner: The Ten Thanks of Thingful. Click HERE to join in, and tell us what you're thankful for. 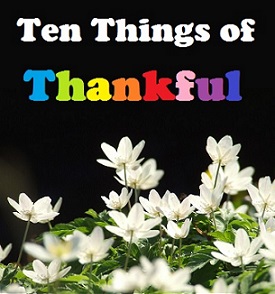 Today is my son Tinny's 19th (yes, I'm that old) birthday. I have mixed feelings about that, since he's currently living with his dad for not following the rules here again, but I'm thankful he's lived this long. I'm thankful he has the option to live with his dad, he hasn't seen a whole lot of him for the past oh, decade or so, but since he does need tough love, and to learn consequences and I'm not ready to kick him to the actual curb, I'm glad he's got another option in between.

I'm thankful my husband and I don't fret over every storm. I'm a member of a local parent page for my town, and I woke to see hundreds of comments from panicked moms about last night's Tornado Watch, or was it a Warning? No tornado was spotted, we haven't had one this close to Chicago for some time, but the conditions were right and a LOT of parents lost sleep, moved their families to the basement, etc., and we slept peacefully not even knowing anything about it.
I let them know I have THANKFULLY installed an AccuWeather app on my phone. It sends me a very loud audible alarm if there is something to actually worry about. It sent me a flash flood warning, and there was enough rain to cancel a concert AND the Taste of Chicago, and knock out our power for hours yesterday, but it thankfully didn't worry me needlessly last night. Technology FTW!

A different kind of thankful. A memorial thankful.

Once in awhile on this rock of rotting, fetid garbage you meet people that put your faith back in humanity. Some people are so kind and generous, you wonder HOW the hell could I be the same species? The good people of this hop, for example, and the people of the Chicago Breast Cancer 3-Day.

If we're smart, we learn from their example. Friday morning the human race got some bad news: An amazing woman I met passed away, and lost her fight with that evil demon cancer.

Marylou was one of the most amazing women I ever met, I'm thankful to have met her and to have known her. She was the perfect mother, wife, grandmother, friend, volunteer, human. She not only volunteered a great deal of her time to cancer charities, when she was no longer able to do that medically, she would knit hats and such for the homeless. From her sick bed she did this.

She gave everyone she knew an example of how to live, how to love unconditionally, how to give back and be a graceful angel even during the darkest times.

When I first met her amazing husband (of 45 years!) was wearing a shirt that read:
"HumanKIND: Be Both"
and that sums it all up right there.
I will never forget you, Marylou, and how you always had a smile for everyone. In the freezing cold, in the pouring rain, at 4a.m. when your team was breaking the "No whining" rule.
Even the a-holes that didn't really deserve one. You made every event, and the world in general, a better place. I can only hope to use that example to try to do a little sliver of the same in my remaining time. I will never be the angel you were, but I shall really, really try to be better.