I took a picture to share with the Facebook world. It's so beautiful, and we don't have any flowers blooming yet in ComfyTown.
Just leaves, and cups and toys. 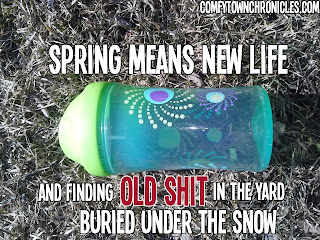 There were snowflakes yesterday, today was 70 degrees, and I imagine we will have a windstorm or something equally crazy straight out of an action movie next week. Soon the weather will change from Bullshit Cold to Bullshit Rain, right before Just-Kill-Me-Now Humidity slash Hell-Hath-No-Fury Heat.

I can hear you thinking “Day-um, is this bitch really talking about the fricking weather again?” I know. I used to think the same thing when I worked in an office: Shut to the UP about the damn weather, we’re not cave people, we can GO INSIDE. When you work in a cubicle it’s always a balmy “whatever temperature the Office Manager sets the thermostat to” and predictable fluorescent lighting skies overhead.

Now that I have kids, kids that NEED to get outside and run “it” off, I’ve become one of those annoying hags always bitching about rain, how our spring is just Second Winter and whatnot. If you’re wondering why anyone would live here, I’ve mentioned this in a bitchy “Mother Nature must have PMS again” weather post before.

In case you don’t live in a climate where the weather changes, when the weather “breaks” as we say, people FREAK the fuck OUT around here. The first 50+ degree day in the spring the outdoor world suddenly becomes crowded. You’ll see tons of motorcycles, convertibles, bike riders, baby strollers, and the less certifiable runners who aren’t crazy enough to run all winter through crunchy gray snirt. (snow/dirt.) Once the hot, lung-sucking summer weather kicks in, a lot of peeps go back indoors, but Spring and Fall? Are cuckoo pants.

I have lived here all my life, so I am always ready in spring with sunglasses for when my eyeballs are violently assaulted with pasty white winter legs. I recently had to try my unsteady hand at tanning lotion, and then spray tanner thanks to an April wedding and my loathing of pantyhose.

I forgot to apply the lotion more than ONE TIME so nothing there. Then, the night before the wedding, I sprayed the cancer-smelling tanning polymer all over and when I woke up I was a streaky, freaky tiger. My husband suggested I apply another layer. That sounded like trying to cure cancer by chain smoking, but what did I have to lose? I couldn't show my bare skin as is, so with copious amounts of sugar scrub and re-spraying, it was workable without having to don any of the devil’s nylon garments. <<shudder>>

Even worse is the first sighting of dreaded winter toes. This is an epidemic of not yet manicured feet *gag* in open-toed whatever-the-fuck-you-call-those gross girl shoes, man-dals (man sandals) and flip flops.

After a seemingly unending Winterfell House of Stark winter, I love to CELEBRATE the coming of Spring in every way possible… except with open-toed shoes, because BARF. It's probably just me though. I hate feet. Any that aren't baby feet.

For Easter shit got real, my daughter turned 3 and is more aware of what up with the What Up, so we have to actually DO STUFF as parents now. Sucks, but if I’m to believe Adam Sandler movies, she will someday wipe her own ass, so it’s a pretty fair trade.

This Easter, we put out the baskets at night (I’m so not buying 3 new baskets every year) and we set out a carrot for the Easter bunny. In the morning, the carrot was magically turned into a stump, with suspiciously large and human-looking teeth marks. 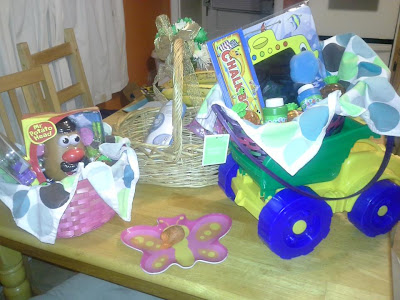 In their baskets were small toys and snacks like raisins, prunes, dried cranberries, (Shutup, they’re baabies) and they each got a small toys.

Count Comfula suggested we color eggs with the 3 year old this year. One part of me wanted to dramatically guffaw, and then seriously suggest he go fuc that we maybe just let her color on them with crayons before WE actually color them (or not.) He has been a natural with parenting and knowing what is best for Lola, so I let him run the show. My first instinct with these things? Is always to take the comfy (lazy) way out and avoid stress at all costs, but that is so lame.

One huge mess, two stained wooden chairs and a stained table later, we both decided yeah, it was WAY TOO SOON to have Lola color eggs. We also definitely got a shitty coloring set with dark, stainy colors and PAINT with a sponge for speckling. Yeah I dunno, must be an industry term. The Count chose to GIVE HER THE SPONGE and paint, instead of just throwing it out, and I guess that got by me somehow between running after my hyper baby and my blind trust. Hindsight can blow me.

During the baby's nap, I took markers to the eggs after "being inspired" (read: Straight up copying) Adventure Time eggs found online. 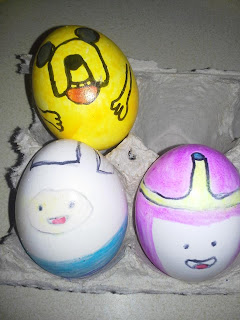 I only did these 3 because the markers were crappy, I needed paint or Sharpies and how much time can you spend decorating eggs when you have tiny kids? Notmuch. They still looked pretty math.

The rest of Easter was spent with family, and me trying to stay sober, which is a LOT easier when you’re super busy chasing after a baby you can’t take your eyes off of. She was literally climbing the furniture. Non. Stop.

The kids had a quick egg hunt in their WINTER COATS, and there was one tender moment outside where the baby was licking rocks and I told her dad about it. He promptly went over and started filming it. If I had time and patience I would figure out how to edit video so I could upload it here, but it's a long video and it's not all that funny for all that work. It's not you, it's me. Look how damn long it took me to blog about Easter.

Instead I can offer this, a picture of the ComfyTown grounds a week ago. The first green poking up of the hastas, aaaaand a cigarette butt. Ah, Springtime is the land awakening. 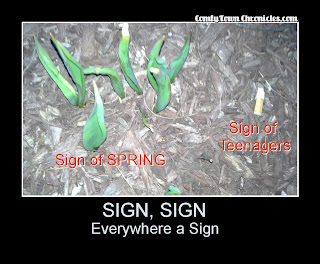 A little madness in the Spring
Is wholesome even for the King.
~Emily Dickinson
Posted by Unknown at 8:08 PM