By now your eyeholes have probably been raped once again by the Krapdashians, as my friend Brian calls them, and they're post-modern all-woman (including plastic Bruce Barbie) holiday card.

I don't know when this became entertainment, especially since no one I talk to is ever entertained by them, or even knows why the Christmas fudge they're famous.

They are extremely amusing to make fun of however. You may not want to add to their buzz, but since, like Joan Rivers says, I'm a "good friend" of theirs, I thought you might want to see the card ideas they REJECTED before choosing.
These two have split up, so they didn't want to send a mixed message. Their fans are really stupid.

Kim always wants just herself in the picture, but since the others are allowed to speak now, they voiced their disapproval.

That sound you hear is her trying to reach a lawyer that will reverse this decision. 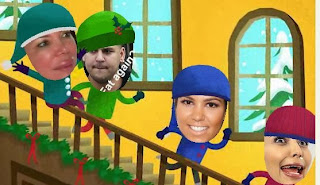 They played around with this fun, "lower middle class" type scenarios for awhile.

They all hated every single moment of this charade. 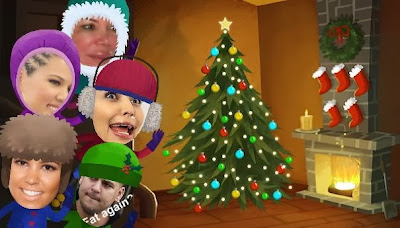 They couldn't get over the fact that a WHOLE FAMILY lives in a house this size, with no walk-in closets, so we had to get them out before their make-up'd heads exploded.

The first place anyone's mind goes with this group is straight baby-got-back to Badonkaville.

...but they didn't love the Busy Twerking Elves theme as much as we would have hoped.


Festive reindeer are always cute, but Kris didn't like what Khloe did to her photo so we had to scrap the whole thing. Dang it, Khloe, why do you ruin everything?


Kim once had a bad dream she went on a blind date with Chevy Chase, so this adorable Deutsche Partei is outenzee.

No, no, no, just NO. Too on the nose. And offensive to orangutans, who can actually LEARN to do actual things. I mean things other than dress in drag, point at clothes other people design and say "Yaay, pretty" or "Eeew, gross" in a robotic voice and stand still for long periods of time having their picture taken.

I really liked this Dance Party theme shown below, but Bruce was trying to scream something about Kanye suing their asses off, it's hard to understand him since his mouth doesn't move anymore, but they wouldn't go for it.
Adorable, right? Look how happy Bruce's face is trying to look. 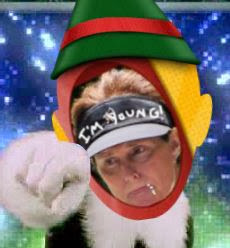 Ummm....mooovies?
So, in the end, for lack of any better ideas or anything they might not be sued for, or anything Kim hadn't had a bad dream about, they went with this. All women. Plus Mason.