In The Game of Thrones You Die

Friday was George R.R. Martin's birthday. He is the author of, among other things (believe it or not,) the Game of Thrones book series. One of the best book series of all time. IMHO. Obviously.

I started this post on Friday, to tell people who haven't read the books they should really start. If you love to get lost in a story, look no further. This series takes you to another world, paints beautiful (and horrible) pictures and the characters are so real, they are good, they are bad, they are fiercely, wickedly evil and super-human noble.

George R.R. Martin
He is a fiction writer, he writes a blog called "Not A Blog" click there for the link, and to get a closer look at his writing, and the man as a person. He is NY Jets fan apparently. Who knew? It is more than a little amusing, to think of this man watching football, but I have to remind myself he is human.

Whether I like it or not, he is allowed other interests and activities besides writing our favorite books. *sigh*

The Game of Thrones series on HBO is how I discovered the series. Up to Season 3 they have kept along with the books. Since they say there will only be 7 seasons, some things will change soon. Both the books and the show are beyond fantastic. I don't like most of what is on television currently, and we are insanely cheap, but we will pay for HBO just for this series. We don't have channels like USA and TBS, but we do have HBO, just because of this show.

I have a hard time reading more than a sentence a week right now, so I'm listening to the audiobooks. I highly recommend them. The reader's voice is like warm, buttery toffee flowing through your ears to gently massage your brain, whisking you away to a world of fantasy. And all the violent killing.
If you watch/read the series, you know. If you don't, let me just say....you know how you're reading a book or watching a show, and one of the main characters comes to his/her conflict, and you're worried about the character, but not really worried, because usually no matter what they have to face, you know this character is going to be all right?

Well, forget all that shit. In the Game of Thrones, you win or you die. With 7 kingdoms at war, many, many die.
This author makes you question everything, take nothing for granted, and you begin to be afraid to make assumptions, or get attached to anyone or anything. You just have to keep reading.

The story and scenery are glorious, set in fictional medieval times, my absolute favorite. The books are full of delicious sword fighting and olde timey speak like:
"She is a young, high-born maid of three and ten."

There is much talk of royal blood lines, and bastard high-borns and mead and wine and dragons, but not talking dragons like that BBC show (barf.) Adults like medieval stories, too, and we like to get lost in the fantasy of it. Nothing pops a nerd boner faster than a friendly, talking dragon.

The characters, the good, the bad and the ugly. They aren't literally ugly in the televised series of course. Because television. Unlike a lot of one-dimensional fictional characters, which are often written either all "good" or all "bad," and the author decides for you, these players are written just like actual people. The good ones can be bad, the bad ones can earn your respect, you decide for yourself, and you will change your mind. They are people, they are complex, and all are great in their own way.

Below is THEE Royal Family of all seven kingdoms in the Game of Thrones, who despite being royalty, aren't the medieval Brady Bunch loving family. This picture is hilarious because their characters are nothing like this.

Left is Tyrion Lannister, hated by his family and most others. Renowned mother-killer (not a spoiler, she died giving birth to him, and no one has forgiven him for it,) and self proclaimed god of "tits and wine," who reminds us with his schemes and plots (same thing,) that even in a time when the strongest man can claim all, brains always win over brawn.

Even though as many say "Words are wind," there are so many phenominal quotes from this book, my favorite are Tyrion's. He tells Jon Snow:
“My brother has his sword, King Robert has his warhammer and I have my mind...and a mind needs books as a sword needs a whetstone if it is to keep its edge. That's why I read so much."

The woman is the famously beautiful and golden Cersei Lannister, determined to change her destiny, and next to her is her twin, Jamie. They have a.....special bond.

Feelings about Jamie range widely from pity to outrage, to a strange sort of respect.

These 3 struggle to impress their barely-human tough-as-nails evil father, Tywin Lannister. He is a powerful battle commander, who has worked his whole life to make the Lannister family rich, famous and feared. There is a saying throughout the seven kingdoms that "a Lannister always pays his debts." This holds true of more than just coin.

These 3 children seem to be made of pure, molten evil but in moments of weakness, they reveal their human, redeeming qualities and make you question your initial opinion of them, and of all people.

If these pathetic, power-hungry seemingly hopeless disappointments to their father can even have good qualities, can all a-holes?

Here is Jon Snow and Samwell Tarley, two average Joes who become unlikely heroes, as the Men in Black. 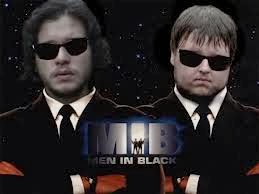 These two have sworn to "take the black," or join The Night's Watch. This means they give their lives to protect The Wall, and live at Castle Black, swearing off women and having their own families. The Wall was built to keep the white walkers, basically zombies, from bothering the rest of Westeros. These zombies are fierce, fast-moving zombies. Thankfully, they never refer to them as zombies, so you're not immediately sick of them.

Jon shows us how we can become more than our mere station in life, with hard work and a fierce fortitude to keep your word, that anything is possible. Sam is not good with a sword, his sworn brothers think he is weak, but he is smart, he reads many books and despite his father's low opinion of him, he makes himself very useful to his brothers and all the Seven.

Up North on The Wall it is always snowing. That is why Jon Snow has his name. All fatherless children born in the north are given the last name of Snow.

The women especially, they are strong and fierce. One is fire-born, literally, in one of the best things that has ever happened in my life, on television or not. She is the Mother of Dragons. She overcomes the terrifying savage people her sniveling brother have pawned her off to like property, to become their fierce, fearless leader.
Their unlikely love makes you question every thought you have ever had on love and loyalty.
Drogo calls Daenerys "Moon of my Life" and
Daenerys calls Drogo "My Sun and Stars."
I am the opposite of romantic, but if you can watch this show and not start saying that, you are probably dead inside.

One of my favorite characters is a child of 9, Arya Stark. Her family is high-born, but unlike her sister, Sansa, a noble lady who says and does exactly as she is supposed to, Arya likes sword fighting and would rather play with her direwolf, or Needle, the knife her half-brother Jon Snow gave her, than learn dancing or lady needlework.

Arya is a warg, she is able to enter the mind of her direwolf, which is just a giant wolf. Arya is a survivor, overcoming great adversity and adapting to every unimaginable thing the author throws at her. I hate to give anything away, but trust me you will love her and start calling all strong women Arya.
Her sister, Sansa, becomes an unlikely hero as well. As most characters in this world, you start out feeling one way about her, that she is a whiny little girly-girl, and soon her actions change your opinion of her. 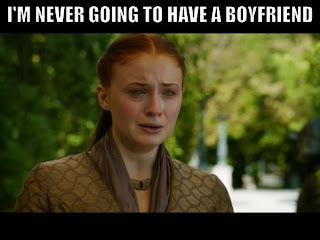 Sansa is a proper lady, and like all girls of her station, she only wants to marry a high-born Lord and raise proper, well-mannered children. She goes on to shine a whole new light on survival, without swords and fighting, and shows a different kind of inner strength. At one point Tyrion Lannister tells her:
"Lady Sansa, you may just survive us yet."

Another amazing Westerossy woman is Brienne. (Pronounced Bry-een) A warrior in a time when women were ladies. She is awkward, over six feet tall, and in the books very unattractive, mockingly called Brienne the Beauty. Thanks to HBO she is played by a beautiful woman with short, messy hair. I can't explain why these characters are so amazing without giving things away, but she kicks major man-hams when she needs to, she is very honorable and loyal to her own detriment, you come to love her and root for her.
Sorry, that is as far as this post went.

The other characters are as amazing and complex and multi-level, I just didn't have time to get into them. Mayhap I will come back and finish, but probably not today or "on the morrow."

I hope it was informative and you got a chuckle of out it!
Posted by Unknown at 1:04 PM