I Hardly Hate Easter At All Anymore

For the longest time I hated Easter. Like vampires hate werewolves and my brother hates book learnin'. HATED it.
There are a lot of little reasons, I’ll try to be brief. I know, but I’ll try. I think Easter is one of the biggest holidays that separate the “normal” god-fearing, church-going folk from the … I don’t know the politically correct term for damaged, experienced, post traumatic stressers, life-challenged individuals.

For me, this day means bad memories about churchy folks, life, and past struggles. I will leave all of the religious complications out of it, that is a post of another color.

I hated Easter the most because after my separation from my son’s father, Easter became the holiday he spent with his dad. Because Irony is a mother heifer, my birthday is on Christmas, and I wanted to have him with me for Christmas. I didn’t have the intestinal fortitude to fight about crap like that. Plus I already kind of hated Easter, so I didn’t really give a two knuckle flying frick. For a few years not having my son allowed me full-on self indulgence, wallowing in self pity with my single friends trying to Opt Out by drinking the day away.

I don’t recommend it, but I can tell you that once you’ve spent part of a major holiday in a dive bar, it changes you a little bit. Almost any bar is the saddest place you can be on a holiday, but some places are particularly dank and sorrowful. The kind of place that has no web site. It needs no Yelp review. It’s occupants go there because it’s the only place they can walk to, and crawl home from. That’s why I was there.

You can almost hear Gollum whispering his tricky riddles, but it’s just that toothless guy at the end. Like all the newbies, he’s trying to figure out if that smell means there might be a pool hidden somewhere. There is no pool. That bleach is covering some deep, dark secrets.

It’s full of people who have given up the charade of family, who give up trying to make things better. If even just for this day, who don’t give a shit what you think about them.
Not just the kind of people who CLAIM they don’t care what other people think, while wearing name brand clothes, expensive trendy glasses and tweet about being “all out of shits to give” on their smartphones from Starbuck’s. This is a sad, scary NothingToLose kind of Not Caring that I saw myself becoming, before I decided to turn things around.

Like a lot of people, after I separated I had to fork over my son to his dad on the agreed days and when I didn’t have him, the pain was overwhelming.
My son Tinny hated the hand-offs, knowing he could no longer have Mom & Dad together, he had to always miss one or the other, he would get understandably upset. Sometimes he cried, mostly he tried not to cry and would get terrible stomach aches. This side effect of Failed Marriage comes with two scoops of Mom guilt.

I tried everything to make my first awful marriage work, and mayhaps some day I’ll write about it, but it’s sad and who wants to bear the weight of someone else’s sadness?
Wait, there’s a whole market for that? Dang, I should probably suck it up and start writing that crap.

Anyway, the first couple of Easters without my son were too painful. What the hell does a mother do without her son on Easter? I drank. And drank. It’s the only thing that didn’t hurt so much. It felt right. It felt natural, like peeing outside.

But there are only so many drinks, so many benders and hangovers when you remember (or don’t) some of the horrible things you did the day before, and you start to see how bad of an idea that is.

I made horrible decisions sober, so you can imagine the bad ideas that seemed not so bad, made in the wee witching hours by a depressed, lonely, failure and guilt-plagued Catholic-raised single mom after drinking and not really eating for hours.

Calling people I used to date was the least of my problems, though those were usually not GOOD ideas. When you stop dating someone, there’s usually a really good reason.
So maybe you reconnect for a week, a day, a night, about a half an hour in some really sad cases. Is it worth it?
To a drunk decision maker: Hell yes, totally!
Anything beats that bottom of an inside-well waiting to get the hose again, lonliestpersonintheWORLD feeling. You know the one, where you feel lonely "in a room full of people." That is dead on balls accurate. Not just in a smelly bar filled with Life's deadbeat dad.
But to a sober person the next morning? No. It’s just picking a scab and poking it.

Whatever made you stop dating them is still going to be there.  You just didn’t care about that reason when you were drunk.
That’s why we binge drink, though isn’t it? To forget about all the things that are not okay. It’s all smiles and rainbows for awhile. Until you wake up. Sober.
Worse than sober, hungover.
And you have to wake up sober. You can’t keep it going, that's like trying to own a rainbow.

I finally figured out this wasn’t helping. Drinking away the pain was temporary, and making it exponentially worse, creating new pain. That’s the last thing I need to do, make NEW horrible experiences and memories. I was over my quota. My mug runneth-ed over.

For the sake of my son, I needed to get control. I never really had any major epiphany, just a bunch of meh-piphanies. If I hit rock bottom, it was either boring or I blacked out and don’t remember. I just started drinking less, less frequently, smaller amounts. I found positive things to do with myself, like volunteering. It's free, and sometimes includes free food and even drinks! I made new friends that gave me hope again.

Awesome, real people who have been through real tragedy, real life experiences. They know the struggle, but unlike my drankin’ buddies, they haven’t thrown in the filthy bar towel. They dust themselves off and try again. They try to give back, even if they don’t have much. They care about people. They know that real people make mistakes, and that’s okay. They encourage people to learn from their mistakes, they support. They CARE. That’s what blew my mind the most.

When you have drinking buddies, they’re not real friends. When you’re not drinking, they have no use for you. When you can’t be their grinder monkey, there to amuse them, they don’t care what you’re going through, if you’re hurting.
It’s just:
“Dance, Monkey!”
They buy you drinks, encourage your shame spiral.
I mean, why not? It’s funny. I’m a funny drunk. Until I’m not.
When I needed help to turn myself around, they cared none for this.
The good-timers.
They’re the “Death by Chocolate” dessert of life. They need to be small doses people. They’re incredibly fun, but incredibly bad for improving your life.
Once I let go, started focusing on more positive things when I felt lonely, life hurt a lot less.
Eventually I started spending Easter with my family again. Sure, I still drank my ass off. One of our most fun Easters was the one where my sisters and sister-in-law and I drank a ton of Blue Moon beer and my sisters and I were all schnookered and being totally silly assholes, while my brother drank one margarita and we teased him about it. Because: Brothers.
At least I didn’t make any horrible decisions that year. Unlike past Easters, this time I stopped drinking in time to safely drive the 2 miles home, and I felt a million times better the next morning.
Each Easter got a little bit easier, involved a little less alcohol, and therefore self-loathing. Eventually I was able to create a positive life where I felt GOOD about myself, and who I was, and what I did, and what I stood for.

And whattayaknow, it was all without a 12-step program, or some zealot calling me a sinner. It’s probably blasphemous to mentally give god a giant foam middle finger, but hey if there was a deity who could indeed read my mind, I would have been stricken down by lightening long ago. Or at least cirrhosis of the liver. I am just eternally grateful I was able to turn things around before I got cirrhosis of the soul.

I eventually became a semi-decent person. Annoying sure, but usually harmless. I had the confidence to get better jobs, to be able to look people in the eye and tell them they SHOULD hire me. I can be relied upon.

I worked my way up to a data management job, where I met a man who was not only handsome, but wicked smart and a total sweetheart. And he was single. WUT?
A unicorn, right? Well, he was kind of a mean asshole.
Huzzah, my soul mate!
And this man was actually attracted to the confidence of the better me.

This man is now my husband, and after working out a few things early on, we have been together for the past ten years. And somehow he doesn't hate me yet.

Now I almost never regret my decisions, because I actually stop to think once in awhile. Yes of course I still have asshole tendencies, that’s not a newsflash if you’ve read any of my daydrinking, stripper, sockpuppet posts, but now I’m less of a devil and more of a scamp.
Now I can live with myself and my decisions. Now I have the confidence to speak up, blog about real life. Okay occasionally, in between giving my kids toys’ dirty stripper names, but hey, that post was hilarious. And my kids can’t read yet.

Now, I don’t dread Easter. I like it. I look forward to it. I still drink with my family, we did the whole “small bottles of booze in plastic eggs” thing, and smoked and did shots on my mom’s porch, but I don’t even enough to have a hangover today. My kids however? That’s another story. I may regret their sugar intake. I can handle that kind of mistake.

Besides, if they weren't sleeping off being Candy Wasted, I wouldn't have had the time to start this post. 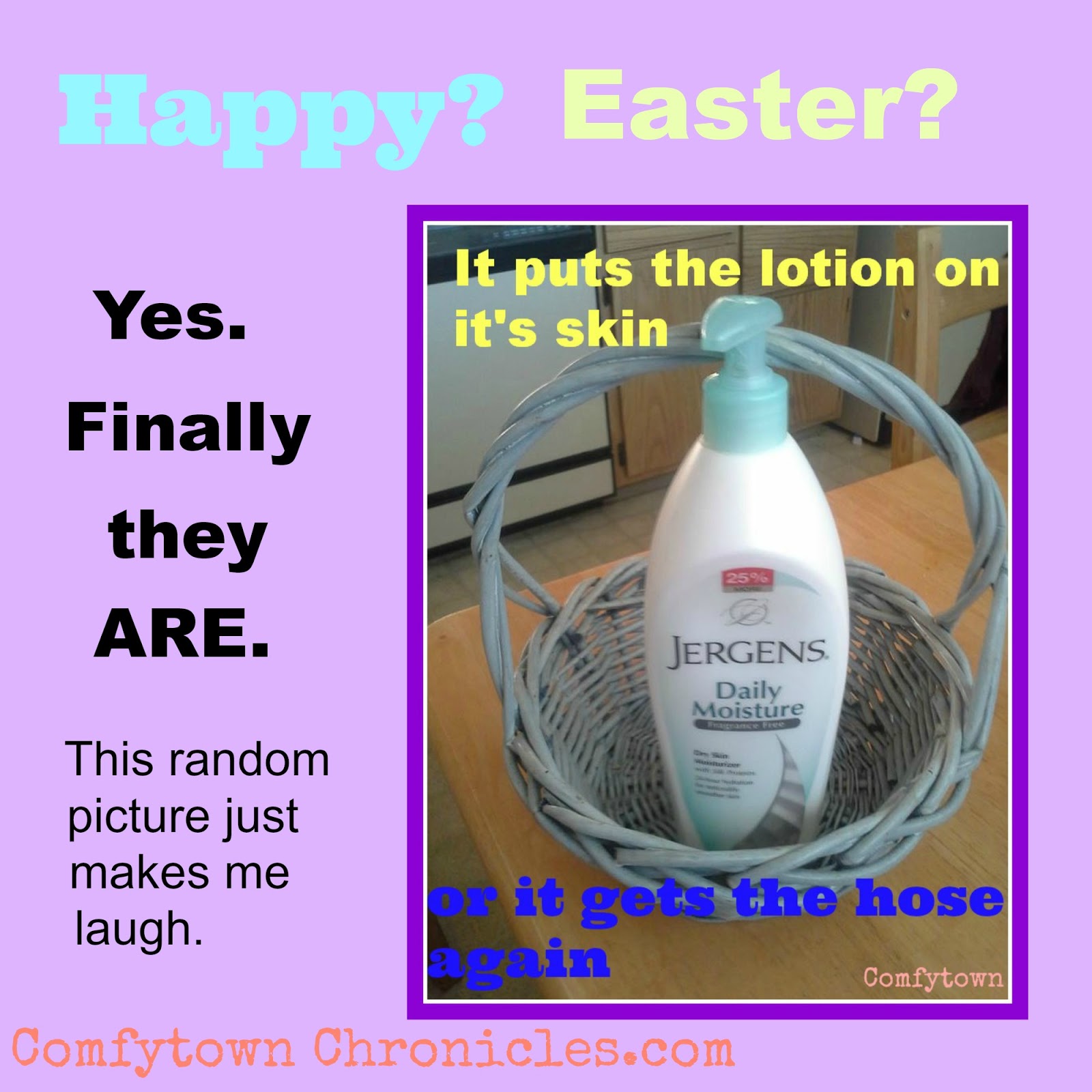