Have you heard about the Tweeting Toaster(s)?

For reasons that started to be about tracking energy consumption, and at one point Jumped The Shark to the insanity level: 'Murica, geeks are currently getting our ironic attention by connecting appliances to other appliances, and in the best (worst) case connecting a toaster to Twitter.

Why? Obviously to brag about that glamorous toaster life, Son, and make witty toast observations. (Those are all LINKS to actual toasters on Twitter, btw.)

Given the amount of animals and other nonsense on social media, I'm sure you believe this is true, but you may be surprised by HOW MANY hits a search of "tweeting toaster" will get you. About 584,000, not counting this post because I haven't posted it yet. If this post had it's own Twitter account, it's latest tweet would read: Still typing. That's why it does not have it's own Twitter account, unlike the toaster below.
You might think: STUPID. You should be thinking that anyway.

Who needs this? Who needs their appliances putting their feelings out there, blaming us for their bad childhood and every bad toasting decision.

Does the world need to know how many bagels we undercook, or muffins we burn, or bakery bread we have to re-toast because of it's infernal inconsistent slicing? I'M ONLY HUMAN.

Even my toaster, the little red Corvette of toasters, only has 4 settings:
Frozen
Bagel
2 other ones I can't read anymore
All things toasted don't fit into your four tidy little categories, you bastards! Some snacks can't be pigeon-holed. I do the best I can.

Besides, my toaster? Is way too pretty for Twitter. I know that sounds not-so-humble-braggy, but lookit, we suffered years through a bad relationship that we tried too hard, for too long, to make work with our previous toaster....ugh, that guy. Don't get me started. It was a hideous---I mean had a bad personality, it was a stubborn, old fashioned, inconsistent ole shoe of a toaster.

It didn't start out that way. Sure our old toaster was cheap, it always worked, and at first when we took it home from the thrift shop it was sunshine in a bag, all rainbows and fuzzy caterpillars. My son Tinny and I picked it out together, it was an appliance of our very own! It did that thing where it would usually EJECT the toast high in the air!

That's the dream. The toast dream.
Talk about Fun on a Bun.

Sometimes the toast would hit the under part of the counter, sometimes Tinnny could actually CATCH IT when it popped up!

That's a priceless trick, you can't put a price on something that provides you early morning athletics, hand-eye coordination and makes your bread warm enough to melt butter.

Believe me, we appreciated all it did for us. It was one of the first things we showed people when they came to our place. Even if we didn't want toast!

But like all gold things, after awhile it faded. Nothing gold can stay, Ponyboy. 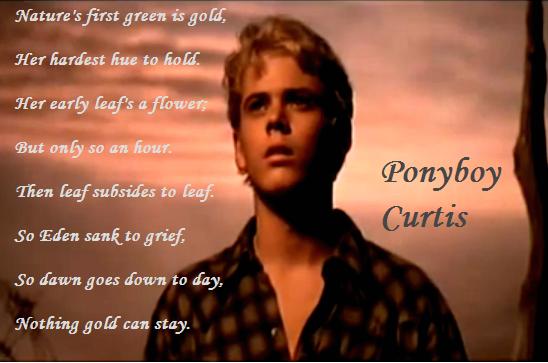 It wasn't really gold, this is a movie metaphor.
Image from fanpop.com
*pauses for tear-wiping*

After a short time, whatever made that old boy extra springy just kind of quagged out. Sometimes it would make a noise like it was popping out, but the toast stayed in there.

Sometimes it didn't pop out at all.

We lost quite a few pieces of bread, even English muffins that way. That's right: Burned to a crisp. Inedible.

Our groceries didn't deserve that. They deserved to fullfill their foodstuff destiny: To be toasted to the perfect degree, and enjoyed by the person that toasted them. After awhile, we had enough of the 2nd-hand toaster.

We deserved better. Hell, our food deserved better. We were forced to invest in a new toaster, that probably wouldn't have an ejector option, but we both took comfort in reenacting that seen from Office Space where they beat the snot out of the printer, except this was in a parking lot, next to a dumpster, with an old toaster. Damn it felt good to be a gangster.

I've wanted to tell her story for some time now. You see, my toaster is the sex. From the moment we saw Red, sitting there among all the plain black, white and silver boring, mousey, vanilla toasters, she shined like a red dime. It was lust at first sight. Who could resist her?

She was new, sleek, glossy, and the all-day parallel red of a night walker's lipstick.
Wait, red?
No, RED.
Out in the boring, western suburbs of Chicago?
Just right there. For anyone to take that wild ride, yo.
Sure, we thought she might be a bit flashy for us, but we're good people. We toast plenty. Sometimes we toast stuff, for grilled cheese and whatnot, AT NIGHT! Who could give her a more exciting life than that? Why shouldn't we have a sexy toaster?

I remember when we got her, like a lot of great love stories start, we met in the Spring.

New life, new growth, colorful flowers and sundresses, time for new, pretty things you can rely on....and *pervy old man elbow* aren't too hard on the eyes, if ya know what I mean. 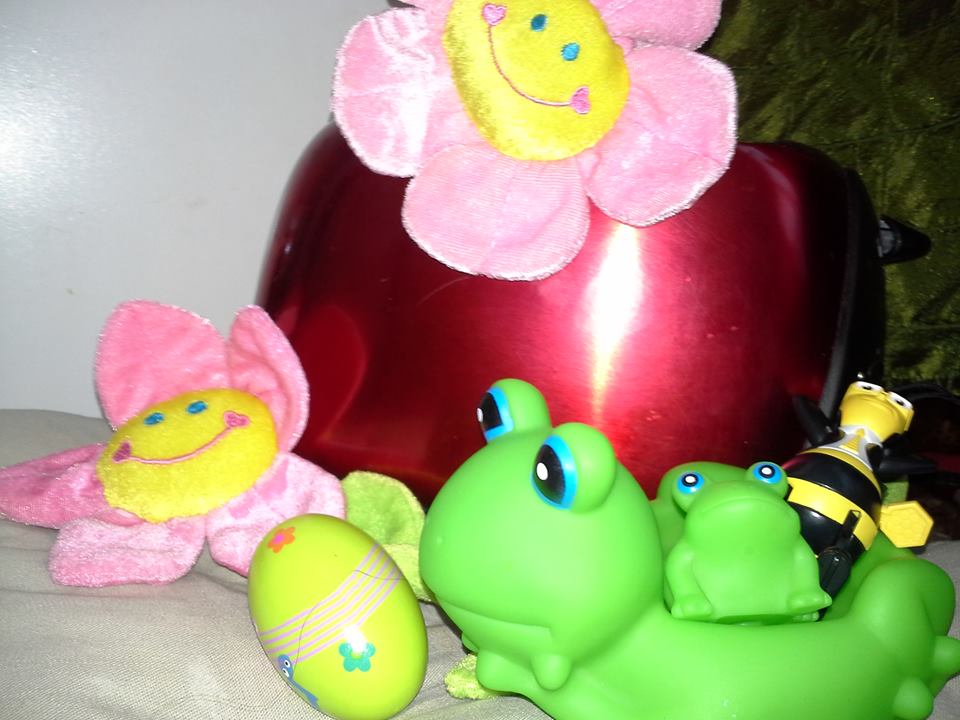 Oh relax. We respect Red for more than just her looks. Remember those FOUR setting buttons? I still use "Frozen" and occasionally even "Bagel," even though CARBS.

We grew to love Red, in all seasons. In summer.


In the mysterious, ever-changing nature of the Fall. 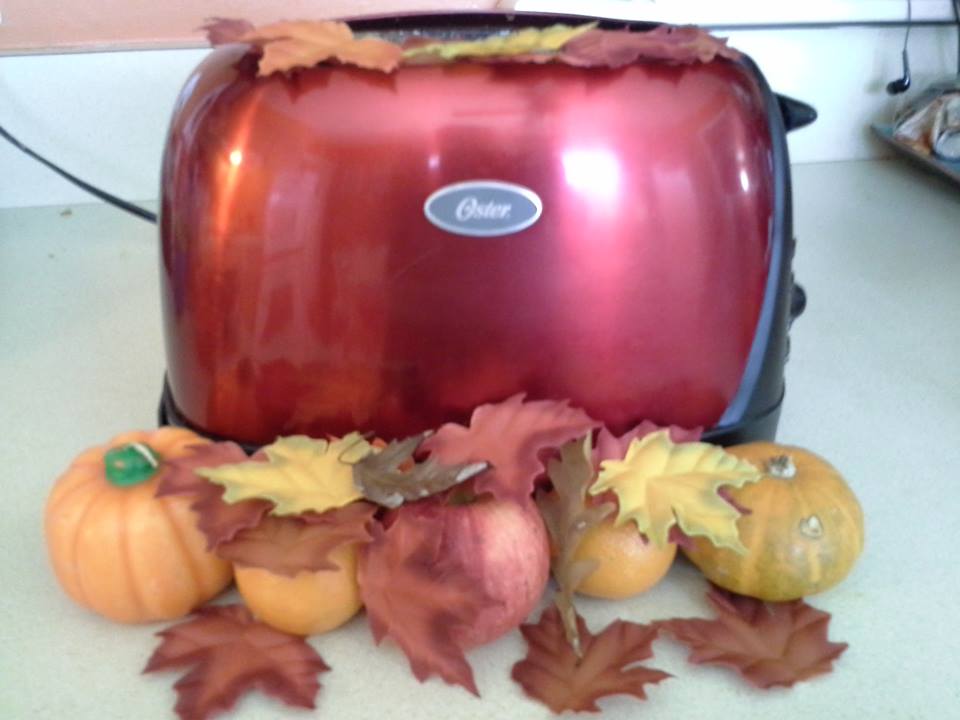 We have a lot of good times.


Red's favorite season is winter, she keeps us toasty.
Through the everyday tea parties...
...and the special occasions...
I know what you're thinking when you see that:
Those SHOES!
Was it Christmas? Because Ho Ho HO.
Well, Judge Judy, you should probably know my husband and I were married in Vegas, so they were perfect.

My point is, we have had many good times over the years. We celebrate her awesomeness in our own way. We don't have to tweet about it.

She's more of an Instagram girl anway, too sexy to tweet.
In my defense, this is every bit no more ridiculous then when people wish their baby "Happy Birthday" on Facebook.
Babies hate Facebook, ask any of them.

Red is the real deal, a Long-Term Relationship toaster, keeping a family of FIVE and all the grain things toasty, while still lookin' sexy for over TEN years now! At one point we bought a red coffeepot to match her, but she was hot whore flash-in-the-pan poser, small parts of her stopped working until she just fell apart. More of a dater player than a stand-up, stick around to raise the kids appliance.

_____________________________
This post is dedicated to Red, one of the sexiest, stand-up toasters of all time, still toasting after all these years! Also my BFF Deb, who had a makeup kit with a lipstick whose official color was "All Day Parallel Red." I consider using that phrase in a post, after over 20 years later, one of my greatest accomplishments as a writer.