To Prep For Ebola: Eat Your Boogers

Ever since the first case of Ebola was said to hit the US, almost everywhere I go I’m hearing/seeing cries for help people freaking out about Ebola. The people worrying haven’t been to a hospital, or on an airplane, or been exposed to a building where anyone with ebola even walked through, much less actually put themselves in contact with the bodily fluids of anyone with the disease, but Worriers Gonna Worry.
Let me just take this quick opportunity to explain how you would get the ebola virus. It’s a scary illness, that’s for sure, however for you to get the virus you would have to be exposed to a person who definitely has it, and actually be IN CONTACT with their bodily fluids.

You’re not going to get it from someone coughing on the bus, or even sneezing right in your face. This won’t give you ebola. A cold? Maybe. Disgusted? Almost definitely, it happens to me every day by cute little kids and it’s still gross.


Now if you have been exposed to someone with the disease, and you went ahead and rolled around in their vomit or blood:

In other words: Calm the Frick Down and have faith in our medical system.

Mostly the people I see worrying are overly-worried (to put it nicely) parents and/or your paranoid types. Your germaphobes, OCD sufferers, anti-bac ralliers, etc.

Mysophobia (Verminophobia) is a pathological fear of contamination and germs.

These are the people who, in their constant vigilance against bacteria, actually CAUSE common germs to mutate into superbugs and antibiotic-resistant strains.

A part of me feels badly for what they’re going through, but mostly the part of me passed down by my old man wants to grab them by the collar and explain at great length just how they’re making things worse.

I do feel badly for actual OCD-sufferers. If you know someone, or are someone, who washes their hands and/or cleans their house to the point where it affects your life, you really should get some help. There may be a very simple fix for you. Science tells us that people with Obsessive Compulsive Disorder have different brain activity. If left untreated, it could get worse. Talk to your doctor, who has heard about these and many worse conditions and will not judge you, and try some different treatment.

If you don’t actually have OCD, your worry is probably coming from a place of fear. You want to be a good parent, a good citizen, or you just don’t want to get sick. I get it.  I understand where some of it is coming from. I used to have many irrational fears from public speaking to a small bout with spider fear, to a myriad of general parenting fears.

Do you want to know how I got over my fears? I just faced them, dead-on-balls straight on. That is a weird way of saying that, at no time did I ever have a fear of any kind of balls. Being a single mother, I was the only one around to deal with spiders in the kid's room.

I had 2 choices: Either freak out and give my offspring the same irrational fear, or can realize they are a part of our world, get over mydambself, grab a cup and just put that little fricker outside. I moved many a spider, I lived, and now I'm not afraid of spiders anymore.

Public speaking? I volunteered to do small training classes with the 3-Day Walk for Breast Cancer, and worked my up to giving talks to the entire crew. I spoke, people stared, I lived, I'm not afraid anymore. And this coming March? I'm marrying an awesome co-crew member and her fiancee.
Which is to say I'm officiating the ceremony as a minster of the church of Universal Life, not that I'm becoming poly-amorous. Not that there's anything wrong with that.

When my first 2 kids were born, I used the anti-bac, I bleached, I washed my hands a million times.

Eventually they got sick, they lived, and now I never buy or use anti-bac anymore. I wash my hands using good old soap and water. We get plenty of exposure to germs, both in our own dirty house, and in public places. I avoid antibiotics at all costs, and we're all healthy.

My oldest is 19 and even though he's a smoker and his main food group is currently Flamin' Hot Cheetos, he almost never gets sick.

Some people obsessively wash, clean, disinfect, and sanitize simply because they want to keep their family safe. They want to feel in control in a world where we may not feel like we have a lot of control. That's a very human reaction to fear.

However, they should know they’re not actually helping their family by keeping them away from germs. That makes their immune systems weak, and therefore more vulnerable when they actually are exposed to germs. Since germs are a part of our world, there is a good chance eventually all children and adults will be exposed to some sort of germs. And that’s okay. Germs are everywhere, you can’t outrun them.

Without getting all science-verbiage on you, did you know there are mites that live on your eyelashes? They feed off the dead skin cells and oil that collect in your follicles. If I showed you a picture you might be horrified, feel free to look them up, because there they are. Every day. They come out to breed on your face at night, and return to your follicles to lay eggs. You can’t run from them. They are there, they are fine. They won’t hurt you. If you tried to interfere with them and say, spray Raid on your face, you would do yourself a huge injustice.
My point, other than grossing everyone knowing that mites are having sex on your face, is that there are some things in your environment that you can’t control, and you’re better to just embrace them.

Do you think people in Mexico go around telling each other “Don’t drink the water!” No, they drink it, they’re fine. This is because their bodies are used to the water. It’s their world, that’s their water, it’s where they live. Their systems adapted. Just like ours need to adapt to our water, our world, our germs.

You would do your family a better service exposing them to everyday germs. Let them actually touch a cart in the grocery store, play at the park where children around them played, even eating their own boogers would be better for them than all the anti-bacterial goop on their little meathooks. Look it up, ask any doctor worth his/her salt, ask any medical student. I will put links to sites at the end of this. 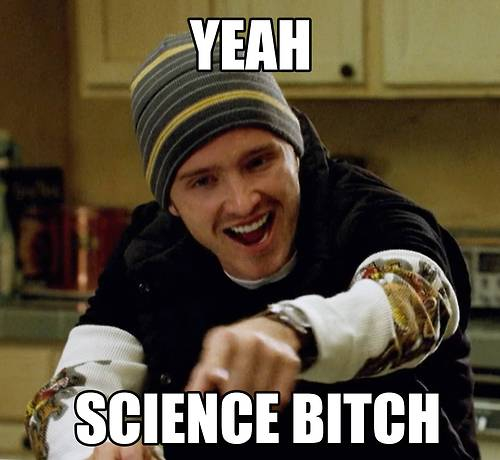 My sister had a friend so afraid of germs, she wouldn’t let her children check out library books because she was afraid there would be boogers in the books from other kids. If there were, this would have done her childrens’ immune systems a world of good.

When you or your children get a common cold, let them fight it. The body knows what to do. Unless you or children are immuno-comprimised, or the fever goes above say 103 degress, the white blood cells and other defense mechanisms will kick in and fight. If you rush them to the doctor and give them anti-biotics every time they’re sick, you may cause the germs to become stronger, and their bodies never learn to develop antibodies.

If you know anyone worried about ebola, just tell them to eat their boogers. 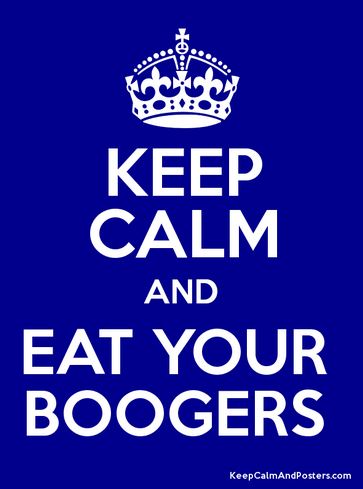 Okay, that is not the only thing that will build your immune system. I mean, think about it, any germs in those boogers were already in your body. My point is, embrace the germs and bacteria in your world, they're not going away and they're good for you.

Some non-wiki links if you want actual science backup:
http://www.cbsnews.com/news/eating-boogers-may-boost-immunity-scientist-suspects/

Here is an article from webMD about exposing your kids to germs:
http://www.webmd.com/parenting/d2n-stopping-germs-12/kids-and-dirt-germs
The bottom line on that article:
"A mounting body of research suggests that exposing infants to germs may offer them greater protection from illnesses such as allergies and asthma later on in life."

That is straight from webMD, not wikipedia.
Posted by Unknown at 7:06 AM

Email ThisBlogThis!Share to TwitterShare to FacebookShare to Pinterest
Labels: build your immunity, do you have ebola, eat your boogers, Ebola, stop using hand sanitizer