“ComfyTown Lately” entry. (More of a journal-type entry.) FYI: My NEXT post will be even MORE FUNNY, pinky freaking SWEAR on it. Teaser: I guest-hosted a blog called “My Personal Journey” complete with a song parody. Later this week I will include a link to that, and the piece it inspired me to do about the current ComfyTown. GET EXCITED!

<<Deep announcer voice>> Meanwhiiile, back in ComfyTown… I’ve been trying to post this for a couple days, but I keep freaking FALLING ASLEEP at 8:30 when I sing lullabies to the girls at their bedtime. I slept on the floor of their room for almost an hour Monday night. My shoulder was killing me. Thankfully, Count Comfula woke me up or I would have been there longer.

Baby Buggie has been keeping us (ME) up every night crying and whining. That comes and goes lately, but Saturday she got her 1-year shots, THREE of them, and for the first time she’s a little sick after. She’s teething, I know they can run a fever from that, too. Before this, she would be the same as Lola after shots (minus Lola’s holy-balls screaming >>MELTDOWNS<< while getting the shot), she would typically just have a fever and be groggy for a day, then fine.

This time, she was walking like a little zombie Charlie Chaplin for a day, it was so cute and sad. 3 days later she has a scary smoker-sounding cough. Her throat is hoarse, but that may be from her nocturnal banshee impression.

She is much worse than Lola, who only occasionally would cry at night. Sometimes Buggy SCREAMS bloody murder during the night. It’s terrifying, especially if she wakes up Lola. She’s gone from my sweet little Angel to “What the hell is WRONG with this baby?!”

Bug’s also starting to be really “active” and “curious” which in Mom-speak means “a giant pain in the ass.” She climbs the furniture to grab anything, scrambles onto the corner tables, falls OFF and gets wedged back there, hits and knocks over the lamps, SLAMS things down…you get the idea. Soo, who wants to babysit??

Lola’s been potty-training, and like a front-line soldier in his letters back home to Mom, I don’t want to give you too much information on the horrors. Maybe when the war is over, I can write about the high- and low-lights, but right now the brutal landscape is too fresh in my mind. <<shudder>> She’s adorable anytime she DOESN’T have to deal with bodily fluids.

Lola’s latest hilarious catch phrase is “There’s an arrow in your butt!” from Shrek. So funny. 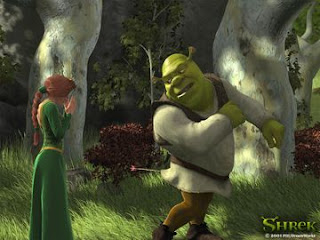 I imagine her preschool teachers will LOVE that in the fall.

We’re handling winter cabin fever pretty well, small trips outside, to the basement, and she is getting more into arts and crafts. She LOVES stickers, and is starting to enjoy PAINTING, yay!

Alex & I both loved painting with Tinny, especially in the Sunny Apartment days, we filled the kitchen walls with our paintings, and it made us all so happy. Lola will do multiple pages now, so she’ll paint as long as it takes to set it up! 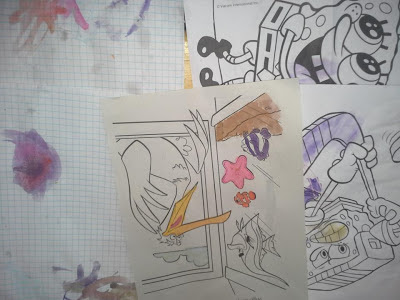 Don't ask which one is mine, you'll only hurt my feelings. Don't make it weird.

These are just HER works. As you can see, my little “Pick-ass-o” is going through her Purple Phase. 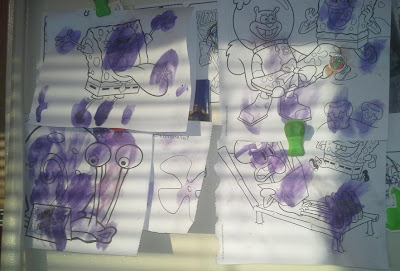 If you ask her what her favorite color is, you get a different answer every time, first it was “Green,” now “Lellow” (how freaking CUTE is that? When Max would baby talk, or someone would baby talk to him, I would be all “Don’t talk to him like a baby” and correct him, saying “Yellow,” but for some DUMBASS reason, it’s adorable when Lola does it. For one thing, we have bigger fish to fry with this one.)

Speaking of Tinny, after recently getting his braces off, he started his LAST SEMESTER of high school! *sniff* but also: KICK ASS for not having to wake him up at 5a.m. starting in June. That has been ‘ROOOF STOOOOF.’ (that’s from Happy Endings, a weird and funny show.)

The Count moved to his new office, adding yet MORE time onto his already ridiculously long commute. It’s funny how much I HATED my long(ish) commute at my last job, but now being in the car for 45 minutes each way, just listening to talk radio, an audiobook, or NOTHING, sounds like HEAVEN! Hahaha

Anyway, he is now home about ONE HOUR a day while the girls are awake. Thankfully Lola stalks him like a celebrity, so that leaves me to deal with the baby for that hour until their bedtime. Then since I’m so zombie tired, I just do whatever HAS to be done that day and go to bed, so we hardly see each other. Don’t cry for him, Argentina, he is OBSESSED with Star Wars The Old Republic, an online game he plays with groups, sometimes my nephew. He’s thrilled not to feel obliged to wait to play his game. It’s great timing.

We still talk on the phone EVERY DAY during his lunch, so he knows all the (dirty) details of what’s happening here all day. I just miss him sometimes, his kicking my ass at EVERY game, except for a very small few.

I better sign off for now, the girls have been playing nicely with toys for almost TEN MINUTES now, so either I fell asleep and I’m dreaming this, or any minute they are going to start fighting and running amok, into the walls and each other.

Be on the EDGE of your SEAT for tomorrow's post! Until then, STAY COMFY!
Posted by Unknown at 3:31 PM