No Need To Buy, We MADE A Zoo

Companionship? I have THREE KIDS, and I watch extra kids. They have all the attention they need. They hide in their closet for alone time.
Security? hahahaha we live in a church town, and there are tumbleweeds blowing down our street day and night.

Wait wait, hold the phone, Chuck, I should first clarify we DO have a pet.

We have a really awesome snake. I’m a big fan. Here's a picture of him, isn't he just precious?? I know.

He’s beautiful, docile and shy, the best pet EVER for big kids and adults.

He's not so great for babies, because they terrify him. And rightly so.

I have no idea if he is in fact a HE, because the process to find out is expensive, and we decided to breed humans instead of snakes, so we don’t need to know. The vet guessed male, we’re fine with that because when we first got him, he would not eat for months so my son called him “Ghandi,” and like most nicknames in ComfyTown, it stuck.

I of course wanted to name him something super badass like “Fenrir Greyback,” a creepy Harry Potter character who eats people and describes how he prefers the taste of female flesh. (Why would you NOT want a pet named after that, amirite?!)

Or at least something like Boba Fett or Chuck Norris, bu-u-u-u-ut I did buy him for my husband, so it's his decision. And he often cannot make decisions to save his life.

He agonizes over effing lightswitch covers at Home Depot, you cannot even imagine HOW LONG it took us to come up with names for our homemade human beings. It takes FORTY long-ass WEEKS for a baby to cook inside a lady oven, and let’s just say if either of my girls had been born with boy junk, we probably STILL would not have named them.

Or we would have given him a stupid-ass nickname like “Bubba Gas Bubbles” or something, and that would have stuck. Picture THAT name on a resume. Where would he work? For Sodastream? The company that manufactures the carbonators for people to make soda at home. I love that damn thing. They are probably the only company that would hire him. Bubba G. Bubbles would RULE at selling that shit!

I was looking for a picture of bubbles, or the Sodastream unit for reference here, and LOOK WHAT I FOUND. I think if the Count and I had a boy, and he obviously wound up working for Sodastream, and for some unknown reason MULLETS and toothpaste-colored suits came back, this would be HIM!!!! We're so proud of you, Bubba.
Sodastream's Salesman Of The Year: Bubba G. Bubbles

Back to our Zoo. Anyone who has visited ComfyTown, or seen pictures I have posted on my Facebook page you know the house looks (and smells) a LOT like a zoo quite often. 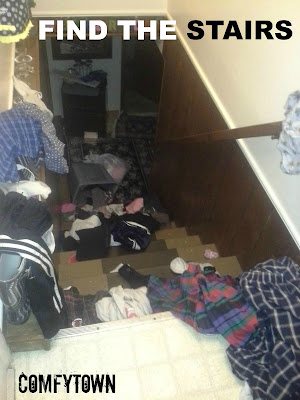 My teenager’s room (and yeah, okay, usually mine) is of course a PIG STY. In true teen fashion, he can have a prickly porcupine disposition.

The toddler, Lola, (age 3) is basically a show pony. One of her favorite games is “Lions” where she walks around on all fours saying “Waaarrr!” and “I’m a Lion.”

Whenever we are waiting for her to “MY DO” which means do it herself, she magically becomes a turtle. When she first wakes up, or does something she knows she shouldn’t have done, she gives you her patented sheepish grin and says, “Oh, why my do dat?” (Making it impossible to get upset with her.)

She remembers all my verbal whoopsy swears like an elephant.
Both of my girls’ nails quickly grow into sharp eagle TALONS, and they both have their moments of funny charm like a cartoon bear.

And then we have the BABY. Basically her own zoo on two legs.

She acts a LOT like a house cat. You might think that's adorable, but let’s face it, cats are usually dicks.

She eats anything like a goat, with the appetite of a wolverine, sometimes right off of the FLOOR like a dog, chews paper and other non-food shit like a puppy.
She’s as cuddly as a koala, but cares about snuggling about as much as Honey Badger. She’s a deadly active alligator in the bathtub.

She makes L*O*U*D noises like some crazy frickin descendant of a pterodactyl. She is as stubborn as a mule.

She spits like a camel, and the other day? She was a tiger. 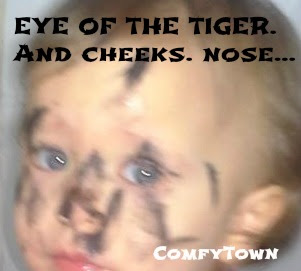 thanks to her sister and an ill-placed tube of mascara. Click the 'fierce baby blah blah' link to read more about that.

You’ll excuse us if we don’t bring any more LIVING [read: pooping] things into ComfyTown, it seems like it would just be less comfy. Besides, Count Comfula is allergic to everything with fur. And I may just add "fins, feathers, scales, and everything else" to that list before long.
Posted by Unknown at 2:38 PM