Once I saw Neatorama's "Doctor Who" version of Cards Against Humanity, the wheels haven't stopped turning.
I love the original game, we've played it a bunch of times and we keep getting worse. As human beings, I mean. Oh, it's just a game.
Life is.

Anyhoo, my family has already started making their own more disturbing version of the cards once we had seen and played all of the cards that come with the game, and even recorded my sister's neighbor reading the card about "Jerking off into a pool of children's tears" (it's a real card from the game) which may or may not be available on my YouTube channel.

Hey, I promised him I wouldn't upload it to Facebook, and I have kept that promise. Because I'm a fracking lady.

In case you haven't seen the game "Cards Against Humanity" here is the perfect Reader's Digest Condensed version from blogdailyherald.com because I couldn't explain it any better.

Ah, Cards Against Humanity. The epic drunk-and-bored game of the early 21st century.
In case you’ve been living under a rock, here are the rules:
It’s Apples to Apples, but horribly and hilariously offensive. They made a Brown version with a bunch of cards and jokes I either didn't get, or just didn't find funny so I didn't include them.
The idea of the game is similar to Mad Libs, you fill in your own blanks, then one person picks what they deem to be the "best" answer. According to them anyway. There's no real right answer, and this makes some people crazy. You try to pick which will be the most offensive amusing to whomever is the lucky person deciding that round.

Knowing your players is the key. And being offensive. So YES, I rule at this game.

This is an example of some of the standard Fill In The Blank black cards that come with the game.
Here are some of the example white cards you can chose from to fill in the blank(s), or "answer" cards, that come with the original game.
With the Dr. Who game, you use the same black 'question' cards and just fill in with the expansion pack of white 'answer' cards.

That got me thinking, anyone could make an expansion pack for anything...

A Parents of Small Children version?
Cards Against Hu-MOM-ity.

Here are some cards from that version. Full deck pending, awaiting money rolling in. Contact me to make a donation. At least for my legal defense.

You know you can picture moms in yoga pants drinking buttery Chardonnay playing this:

I am even MORE excited for my expansion pack:
Cards Against Nerd-manity
in which I replace the cards with people, places and offensive things from my favorite nerdy books, shows and movies.

That title may be offensive to manities.

Meh, it's just a working title.

This version will probably never be available for legal purchase, imagine the royalty paperwork, but you can contact ME for a printable version for the low, low SUGGESTED DONATION of say, grocery gift cards. My kids gotta eat. 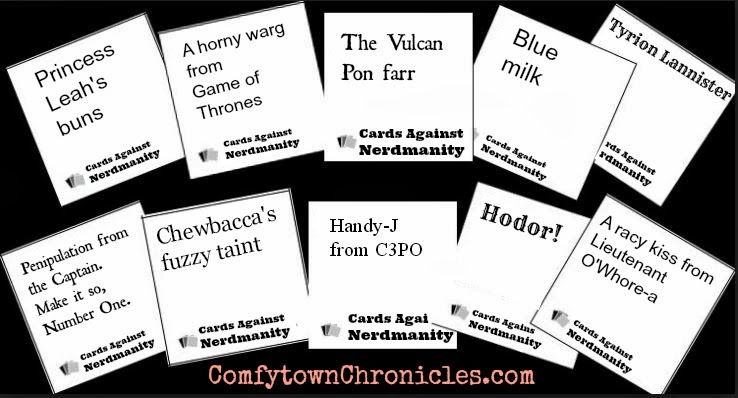 Just like I did with the real game, you may have to talk to Google about some of these.